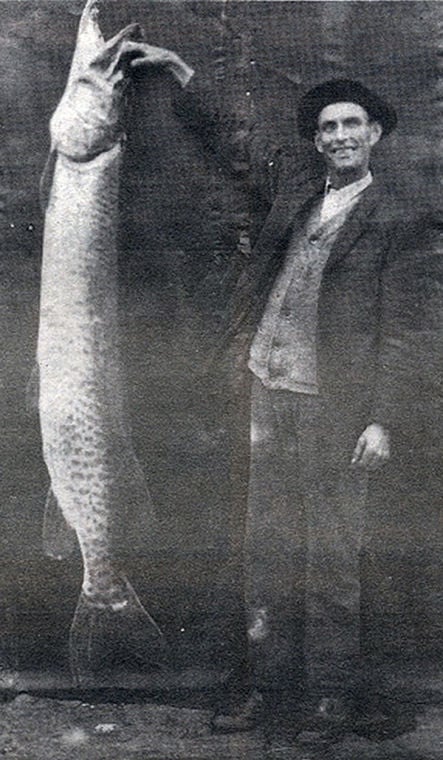 “This hoax was actually perpetrated in 1908. It is likely one of the greatest hoaxes in musky fishing history. Needless to say, it is far beyond the capability of the species’ growth.” In an article by Larry Ramsel,   author of two books on the subject of MUSKIES, notes that the image “actually turned out to be a 54 pound musky that had been speared and then a local photographer combined photos of that fish and two different men (above) standing with their arm outstretched to ‘produce’ a 7 foot 4 inch monster.” LOL!

While looking through a library book on fishing, I came across an old photo of a man standing next to a musky purported to be 7 feet 4 inches and 110 pounds. I was so intrigued that I photocopied the page. I recently uncovered the copy while looking through some old fishing files. And so began a search for more details.

The only other information mentioned in the caption was that the fish was “taken in Intermediate Lake, Antrim County, Michigan, in 1919.”

Unfortunately, the book is no longer in the Carnegie-Stout library’s collection, so I turned to the Internet.

My initial searches proved fruitless. Then I found a Flickr site with hundreds of fishing photos from Michigan, and began clicking. There, on the 53rd of 55 pages, was a photo of the same fish — but with a different (and seemingly much taller) man standing beside it.

It appeared to be clipped from a publication. The label read: “World record? Angler holds up his 110-pound musky taken in Torch River sometime between 1915 and 1920.” Although the site was different, the weight and time frame were the same.

Knowing that conventional records for the biggest muskellunge are in the 70-pound range, I was curious. Maybe the fish was netted or taken by some means other than hook and line. Regardless, a muskie of those proportions would be phenomenal or, perhaps, … suspicious.

I sent an e-mail to the Michigan DNR, inquiring about details and the validity of the catch. My note was eventually passed on to “muskellunge historian” Larry Ramsell, author of two books on the subject of MUSKIES.

He quickly dispelled any notion of truth to the claim, saying “this hoax was actually perpetrated in 1908. It is likely one of the greatest hoaxes in muskie history. Needless to say, it is far beyond the capability of the species’ growth.”

Larry Ramsell has made a career out of documenting valid records and vetting some legendary claims. He is skeptical of many of the world records currently on the books and adds that a recent Michigan catch is being considered as the new benchmark.

He is involved with the Modern Day Muskellunge World Record Keeping Program, dedicated to verifying and recording the largest of the species.