This is the ticket!

In the north country where it is found, the musky is a legend. When fishing conditions are not conducive to success, the musky can seem to be even more than its billing of “The Fish of 10,000 Casts.” But when conditions are right, big muskies seem to be everywhere.
Is it really that hard to catch? A new breed of musky angler the musky hunter, has evolved. These fishermen seek muskies, and little else, and are effectively narrowing their time between musky catches. From countless hours on the water they have gained insight into what makes muskies tick, and from countless hours of thinking about muskies they are devising new strategies for catching them.
Year after year there are a couple of things I noticed on every one of my Musky fishing trips.  Novice musky hunters have one thing in common: All of them, without fail, cast their arms off for hours upon hours with little to show but a tired body and a sore arm.  Back in the day, when I first started fishing for Musky, I was one of them.

Then, when I became a seasoned Musky Hunter, I learned that in order to catch a trophy musky, I was only wasting  my time by casting the typical areas like weed beds, shore lines and other shallow structures.

I learned that anyone willing to spend the time casting, can and will catch a legal musky now and then, only to get excited by thinking they are doing the right thing. Well, it might be right for the person that never caught a legal musky before or are happy just catching a musky of any size!

Larger, trophy sized Muskies­ can be extremely tricky at times and fishing for them involves a lot of precision. Trolling with a slow deliberate speed with  down riggers help provide this necessity. Most Musky Hunters know that using a  down rigger will keep a lure at a constant, specific depth & in the strike zone. And since we know the importance of depth in muskie fishing, this is a valuable tool. 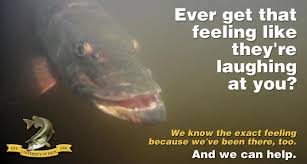 It’s only common sense: The use of a down rigger will provide deeper lines with precise control. Allow several lines at different depths, and most important, cover more water!

To use a down rigger, you’ll want to follow some basic steps:

From your vast assortment, pick a lure that won’t dive too deep or pull too hard. This allows you to be aware of how deep the lure’s running, saving you from too many false releases. As you go, monitor for schools of suspended bait fish with a paper graph, video or liquid-crystal. After letting out 10 ft (3 meters) of line, attach it to your release and set the tension adjustment so that it’s tight enough to prevent trips from the pull of the line. Lower the cannonball so that it levels off and tracks just above the bait. It’s an important rule of thumb to remember that muskies are more likely to swim up for a lure than to swim down.

When you get a strike, speed your boat up slightly. This helps prevent any slack in your line that might allow the muskie to free itself from your hook. Set the hook one time, just to make sure of a good initial hook set. Most of the time when trolling, a Musky will hook itself just by the speed of the boat.

Learn to use down riggers, and you will triple your Musky action. You might even land a trophy big enough to mount!

When you get home from your trip, you might even feel like you were on a vacation, rather than feeling like you were working on a chain gang!…..Good Luck!