Musky VS The King!

There he stands, draped in more equipment than a telephone lineman, trying to outwit an organism with a brain no bigger than a breadcrumb, and getting licked in the process!

Question: What would you rather catch, a 32 lb musky, or a 28 lb King Salmon?

NOTHING MAKES A FISH BIGGER THAN ALMOST BEING CAUGHT

There are as many myths about fishing for Musky as there are Musky! At least the ones over 30 pounds, that is….. The biggest myth of all, is the one I have been hearing for over forty years:  It’s the one that says it takes thousand casts to catch a legal Musky!  This myth of a 10,000 casts has been perpetuated by novice fisherman, and by the Media…..How about the fisherman that have caught a legal on their first cast?  Think that there would be an average somewhere along the line? I suppose it’s more fun to talk about 10,000 casts.  However, there is some truth to the idea that Muskies are more difficult to catch than other large game, although no way near as difficult as reported. It is also true that most wanna-be novice Musky fisherman do not know the first thing about how, where or when to fish for Musky. These novices travel thousands of miles, and spend a zillion bucks every year only to come home to brag about a few follows! Yes, I did say follows!  It makes me laugh to hear them actually talking about seeing a fish! Well, I guess it’s human nature! I was in the same boat (no pun intended) at one time…..and don’t get me wrong, it is exciting to see a five foot creature watching  and following your lure. It does usually indicate that the Muskies are some what active….. Your better die hard Musky hunters know how to take advantage of this, using some tactics, like figure eights. I will give the mighty Musky a good amount of credit for their ability to get off the hook when connected. The real big muskies I have had on have always figured out a way to get off! Your more experienced Musky hunters say pretty much the same thing. I think it’s because of their extra hard mouths and sharp gill plates. 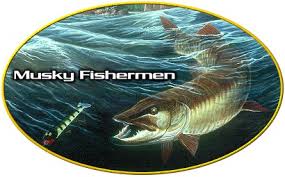 Another flat out Myth is that Muskies are the best fighters of all fresh water game fish in America. Well, that is not true! Sorry, all you die hard Musky hunters! A Musky does not compare to the “King”!  I’m talking about Chinook Salmon…..For those of you that are reading this article and  that are thinking that i’m nuts, I’ll explain why the Musky is over rated…..

Please be sure to read this: I designed this website & wrote this article, but I no longer own it…..

The largest Musky I have ever caught was a thirty-two lb. 52 inch beast I nailed back in 1983 at Lake Of The Woods, Canada.  The total fight lasted about five minutes. It was really hard to believe that it gave up so easy! It made two short runs, tried to get under my boat and into my net it went!  The largest “King,” I got in my boat was just over twenty-eight pounds, I caught this puppy up in Door County Wisconsin on Sister Bay. I had to follow it in my boat for fear it would take out all my line, like many big Kings do.  The fight lasted about an hour! After many long runs, including one that almost took out all of my line, the giant jumped a few times along side my boat and tried to wrap around my motor.  It almost got off close to the boat, but I was lucky enough to land it. That is not the only time I have to compare the two fish.  There have been many times big kings have taken out all of my line. This has never happened to me while fishing for Musky, and  I have had some real hogs on. The Muskies I have caught in the twenty pound range did not even compare to some king salmon I got in the teens! I believe Muskies do not have nearly the stamina as salmons.   The two fish don’t even come close when it comes to fighting power. It burns me up to hear and read all the hype about how great Muskies are…..It makes me wonder if any one of the writers have ever fished for the “King?”

One thing is true! Some Musky fisherman do get hooked on the pursuit of a trophy Musky, and at times it becomes a compulsion! This relentless pursuit is sometimes called “Musky Fever”.  Many years ago I had the sickness my self! I was cured when I started fishing for Chinook Salmon (The King) on Lake Michigan back in 1967.

There is no doubt, salmon claim the title as the Great Lakes most popular game fish. They are highly respected for their powerful long, line-stripping runs and hook bending strikes, as well as their tasty fillets. Pound for pound, I feel that the King Salmon gives the best fight of any fresh water fish. That includes the over rated MUSKY! If you are looking for fishing action that is so exciting it’s addictive, then give salmon trolling a try. One glimpse of a thirty pound Chinook slicing a calm lake surface, or a wild Coho frantically leaping to shake the hook, you will be sold and keep going back for more, again and again.